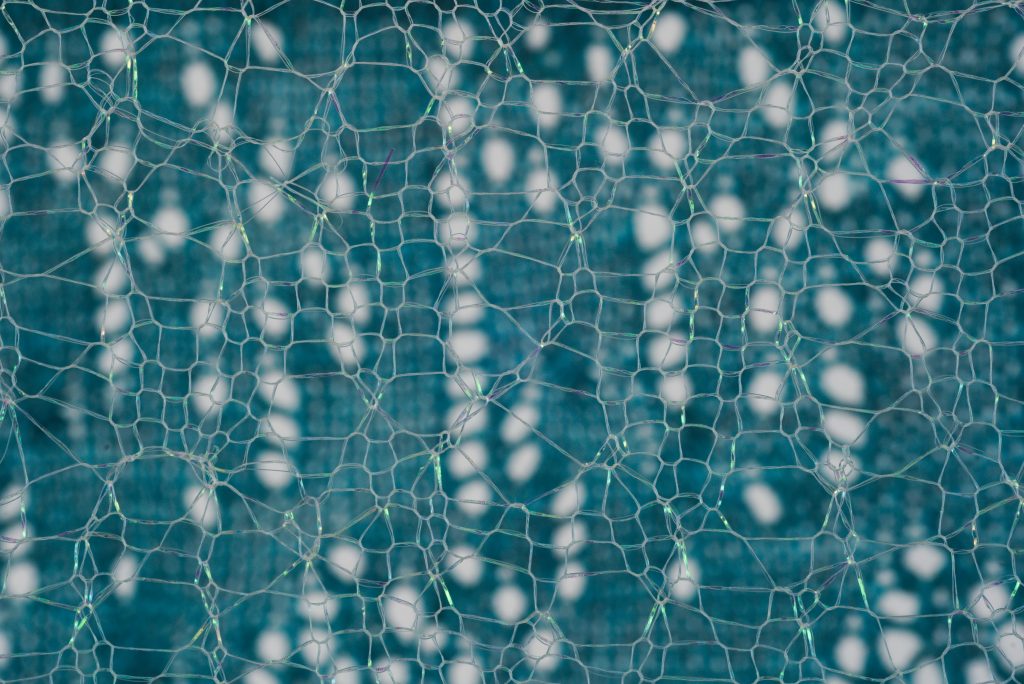 This artwork was commissioned as part of the Yarnadelic Remixes 0.1 project by KNITSONIK (Felicity Ford) and Labistrake (Muriel Pensivy). Learn more about the song Woman Blue and the Yarnandelic Remix project on Knitsonik’s blog.

Gallery statement for Woman Blue – Elevate  written by curators Griffi and Rosie for the We Gather Exhibition.

“Woman Blue is  a new work based on an old blues song, first written down and published in 1934 under the title Woman Blue in the book, American Ballads and Folk Songs, produced by John and Alan Lomax. Modern versions of the tune can be traced back to 1927, however it was an unknown eighteen-year old black girl, in prison for murder in America, who is noted to have first sung the first verse of the song to the Lomaxes. Their published version of the song went on to be adapted in numerous versions by many mainstream artists and is better know as I Know You Rider.

Lorna says “there is no publicly accessible recording of the 18 year old black girl singing the verse that forms the basis of the song. The song has never been recorded by a black woman/person from the research myself and Felix have done. There have been many versions recorded but all by white people.”

Woman Blue Elevate was commissioned by Felicity (Felix) Ford and Muriel Pensivy to form part of Yarnadelic Remixes 0.1 – a knitting project exploring the translation of particular pieces of music into knitting patterns. Lorna used this opportunity to explore a more conceptual knit, different to her often figurative based works: “why can’t the knitting be like an abstract painting…. just look at it and what do you see” she explains.

As research for Yarnadelic Remixes 0.1, Muriel Pensivy arranged Woman Blue for a programmable music box – a componium. Just as punch-cards tell a componium where and when to play a note, they also tell a knitting machine where and when to make a stitch. Part of the project inspiration for Woman Blue – Elevate was to translate Muriel’s punch-card into a punch-card for the knitting machine, in order to reproduce the music in knitted lace. Lorna created two punch-cards and subsequently two panels: one in a delicate transparent lurex based on the single verse sung by the unknown young woman, and one based on Muriel’s version of the song in the mottled blue Yarnadelic yarn produced by John Arbon Textiles and named Woman in Blue after the song.

In the blue panel Lorna considered the irregular syncopation and rhythms of jazz and blues, emanating a freestyle switch and change motion to her knitting process. Turning the panel upside down to re-knit, she also added in cabling and knots to reference the many versions of the song – the multiple voices, layers and segments –  that have resulted from the original verse. Alongside this she referenced the 2,4 beat of the music through 2 rows of knitting and 4 rows of lace.

Lorna wanted to honor the unknown woman in her own right. In her own panel, separate from the other renditions of her song. Lorna carefully took her words and corresponded each letter of the lyrics with a coordinating number in the alphabet. She then used the corresponding numbers to create a punch-card with its basis in the woman’s words.

Lorna’s intention to display the young woman’s panel in front and elevated above the other verses is powerful, casting the patterns of the knit onto the other verses. “You have to look at the girl’s words and what she said. She is going to have her day of fame”.

I know you, rider, gon-na miss me when I’m gone,

“Ah yes, well I came across the song originally by the The Grateful Dead, then I heard the Judy Roderick version on WFMU played by a DJ called Monica Lynch, I was aware it was originally a blues song and related to hardship but did not know it originated from a song sung by an imprisoned black woman”. John

Why I chose Woman Blue:

The video below is part of an interview I had with Felix Ford which gives the reason for my choice, the symbolism in the artwork and much more. We can’t be sure but we think we’ve found a clip that contains the voice of the 18 year black girl. Give it a watch.

Woman Blue – Elevate is on display until 5th February 2022 as part of the We Gather Exhibition. I will be talking about this piece and other artworks in the Exhibition on January 20th 2022 at Knit and Tings

‘We Gather’ features five female Black and Asian heritage artists. Whilst their chosen materials and disciplines vary, their work shares a commitment to craft and its cultural value. The makers are myself, Shaheen Ahmed, Omeima Mudawi-Rowlings, Francisca Onumah and Onome Otite. Curated by Rosie Ross and Griffi, the exhibition was borne out of Dr Karen Patel’s Craft Expertise Research that highlights racism within the craft sector.

Thank you Dr. Lucie Whitmore for the lovely feedback.