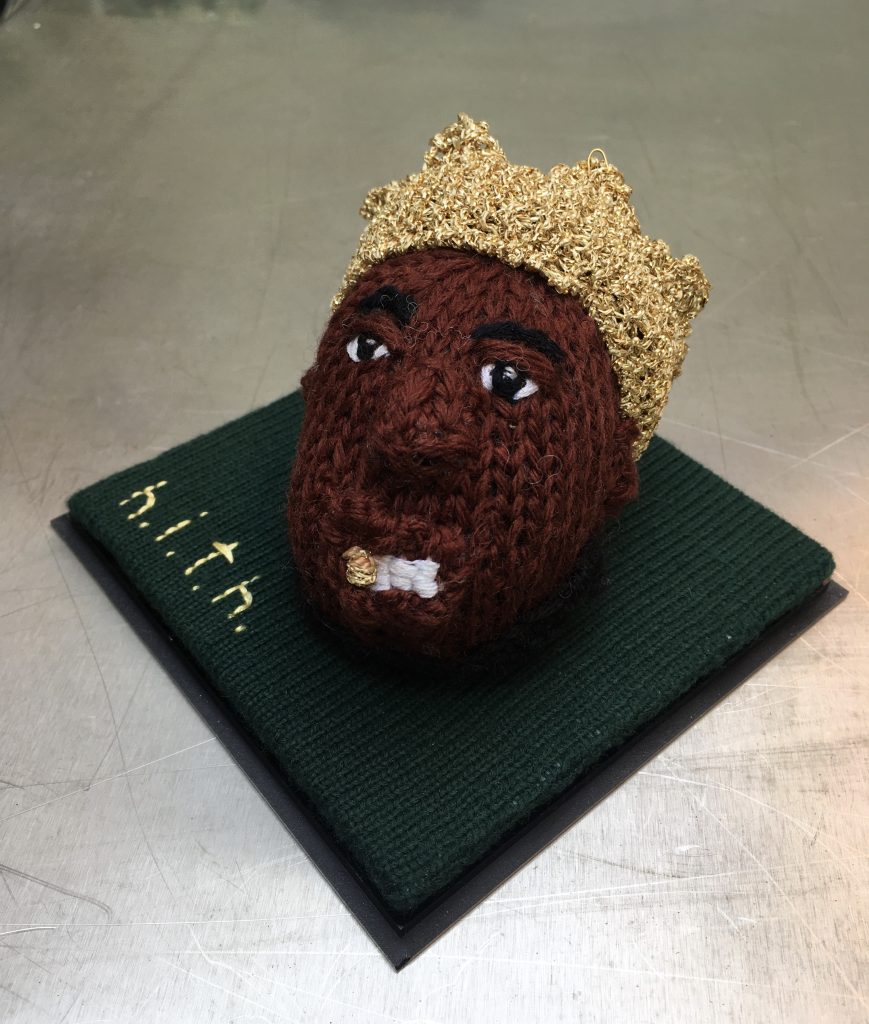 The grime artist Michael Omari aka Stormzy has always inspired me. I love that he has never let anything stop him from pursuing his dreams. If he is  not given a seat at the table he creates his own table.

In 2019 I had the pleasure to meet him in person when he opened his promotional Merky News shop in partnership with Relentless Energy Drinks in Soho, London.

When I met Stormzy I took the opportunity to ask if I could knit his portrait. At the time I was working on some designs. I had envisioned making the artwork in the style of the portraits I knitted of Noah Stewart and Leontyne Price. Luckily I had an image on my phone to show him. He said that would be brilliant!

I worked on many 2D designs but wasn’t happy with any of them. Following Stormzy’s outstanding headlining at Glastonbury in June 2019 I thought I need to honour him. He was the first Black British male to headliner at Glastonbury festival. His set was outstanding. I loved when he stated ‘We’re gonna take this to church’ as he performed Blinded By Your Grace.

I knitted the 3D head of Stormzy after hearing his single Crown. A refrain from the song is below.

Amen, in Jesus’ name, yes I declare it
Any little seed I receive, I have to share it
Bruddas wanna break me down, I can’t bare it
But heavy is the head with the crown, I still wear it

“The Shakespeare quote ‘uneasy is the head that wears a crown’ is from Henry IV Part 2  is often now phrased as ‘heavy is the head the wears the crown’. The phrase has become an English idiom meaning that those charged with major responsibility carry a heavy burden that makes it difficult for them to relax. Perhaps most famously, UK grime artist Stormzy uses this Shakespeare line in his album, Heavy is the head – an album with rave reviews that will last.” https://nosweatshakespeare.com/quotes/famous/heavy-is-the-head-that-wears-the-crown/  (viewed 21/11/21)

Crown, is track number three on Stormzy’s album Heavy is the Head (h.i.t.h) which came out on 13th December 2019. It featured collaborations with Aitch, Burna Boy, Ed Sheeran, Headie One, H.E.R., and Yebba.

I submitted the photo above for the Hastings Contemporary’s Artists Pledge Show  ‘A Generous Space’ on Instagram. The show is being organised by #artistsupportpledge founder Matthew Burrows. In case you don’t know what the Artist Support Pledge is:

Initially the Hastings Contemporary Artist Pledge Show was planned as a virtual show but now it will be a physical show starting on 25th November until 17th April 2022.

Personal choices along with Ciaran Bowen, Henrietta MacPhee, Jen Roper, Pinky Tesfay, Sarah Dwyer and Sheena Vallely. Lakwenka is an artist who I admire so to be chosen by her is so special.

Commenting on her choices Lakwena said:  “After a long period of us all having been restricted to seeing a lot of art and people through screens, the works that interested me most were those that had some tactility to them, and/or gave some glimpse into the every day lives of the artists who made them. What I like about these works is the space they open up for simple human connection.”

I knitted a dark green base and embroidered the letters h.i.t.h., to reflect the album cover designed by Hales Curtis studio. The head lies flat to symbolism the weight of the crown. The limitations of adding fine details to a knitted head of this size meant adding a distinguishing feature was important. To this end I have added Stormzy’s gold tooth.

I have been greatly inspired by Pat Wilson of Knitting image who is an expert at capturing the likeness of people in the public eye with knitting. Check out her amazing knits.

It would be amazing  if Stormzy got to see this artwork but now that he is not on any social media platforms – it’s a challenge. Maybe someone reading this post will let him know 🙂